A Brief Look Back in Time…

I’ve not posted these past two weeks because I was experiencing what I’m calling my Fourth Flare. The first Tuesday I missed (January 19th), I was really sick and unable to do anything productive, even write about how I was feeling. The second Tuesday, January 26, I was getting discharged from a stay in the hospital. Needless to say, I definitely fell through the doorframe of absolute darkness (see Ulcerative Colitis Confession No.1). While in the hospital, a lot of the nurses asked me how long I’ve had ulcerative colitis, and I found myself a little blurry on the details. So for my benefit, I’ve made a little time line.

November, 2013: First flare (I had no idea what was happening to me)

April/May 2014: Diagnosed with sacroiliitis and started Remicade to treat both autoimmune diseases

And now here I am, at 4 o’clock in the morning (but I’ve been up since 2:30), writing because my prednisone brain is back in action. Let me tell you a little about how weird and different this flare was.

I would say I was suffering from a very slow decline in health over an extended period of time, since November really. Things really started to go down hill after my December 28th colonoscopy, which showed that my colon was in good shape and that only the tail end of it was slightly inflamed and suffering from colitis. The day after my colonoscopy I had to go to the lab for a previous order to check on my 6MP levels (which were above therapeutic) and my ESR (inflammatory marker) was only slightly elevated at 28 (standard range is 1-20).

The steroid retention enemas helped at first but then I felt like they started making me go more and I was unable to get any sleep. My bowl movements went up to 15 a day with a lot of pain. They were a weird mix of contradictions. I had extreme urges to go, would release a lot of painful gas and pink mucus and that was it. Then I would have extreme stomach cramps, urgency, and my body would painfully push and spasm by itself and only get out a small amount of stool. The stomach cramps were so bad and I started taking MiraLax twice a day because it seemed to help with them. However, that would cause me to have two or three extremely urgent and also painful liquid bowel movements.

Then I started to get chills, fevers, and joint and muscle aches. This is what really concerned my doctor, because of the type of medications I’m on. I had a Remicade infusion the week before so I could have created antibodies to it or be having an allergic reaction to the serum. Almost all the medication I’m on also lowers my immune system’s ability to fight off infection, so I could have also caught a simple cold or virus that was instigating my ulcerative colitis flare. My doctor ordered stool samples, urine samples, and a huge blood lab that covered a lot of things, including testing for lupus.

One of the tests I personally always go by and actually understand is the ESR. It makes sense to me, it’s easy to understand, and for the most part, it matches and confirms what my body and mind feels. I know I was suffering from a fever when I had my labs drawn, which might explain the 63 ESR reading. That is the highest it has ever been for me. But it also confused me, because despite me being in a lot of pain, I still wasn’t as bad off as the last two flares. During those, I was up to the screaming, crying, and hitting the bathtub hard enough to bruise my hand kind of pain level. This time, I was still in just the moaning, groaning, and whimpering stage.

I then informed my doctor of my recurring fevers and my difficulty in urinating, which had developed over the past two days. Because of this, she decided to have me hospitalized for hydration, pain management, and bowel rest. I skipped the ER and was directly admitted. 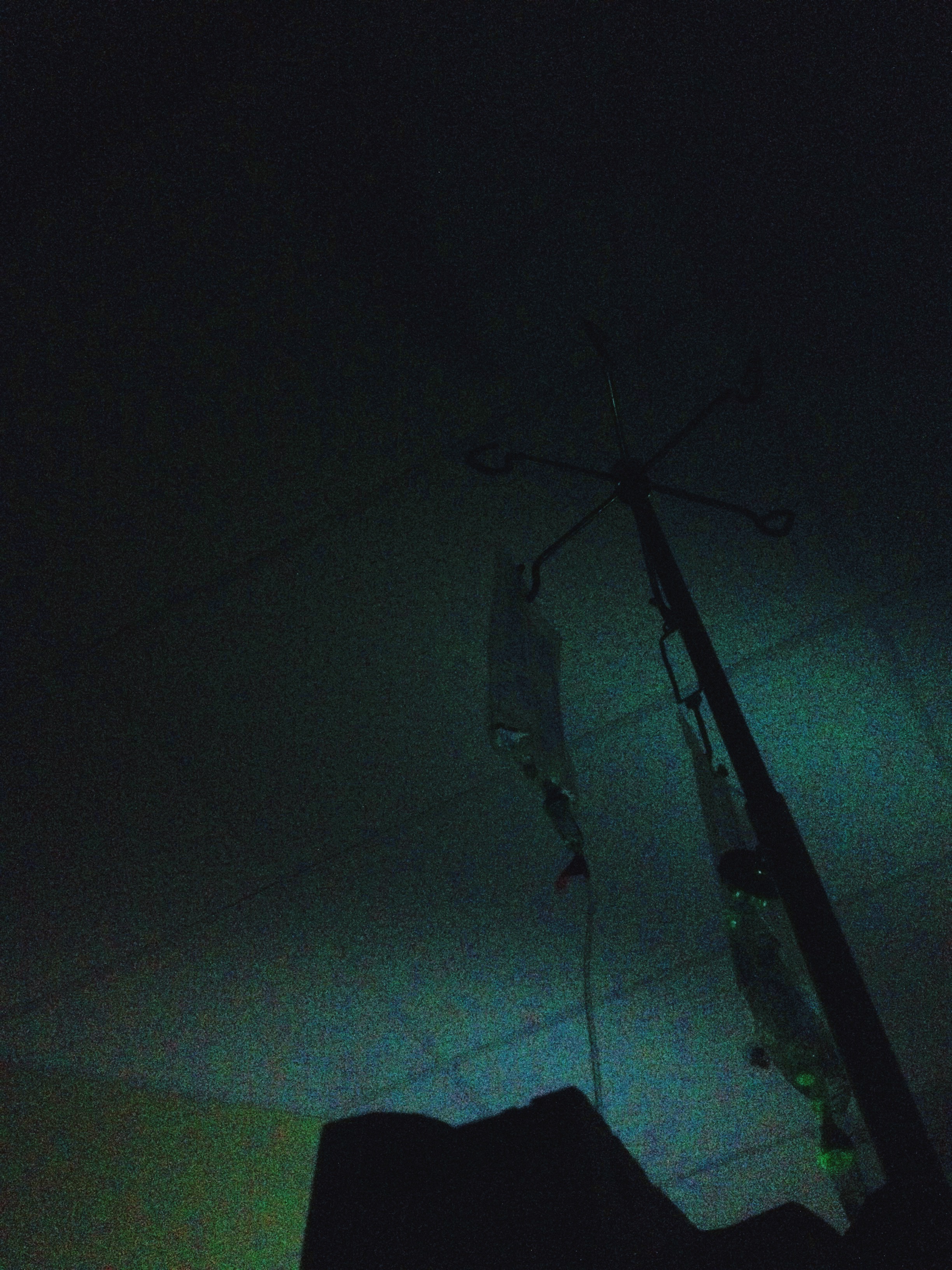 Processed with VSCOcam with c6 preset

While in the hospital I had a sigmoidoscopy done to assess at least part of my colon and so the doctors could collect biopsy’s to rule out any viruses or bugs that could be causing my symptoms (they didn’t want to put me on prednisone until they were sure it was strictly ulcerative colitis). This is the part that was weird, confusing, and caused me a little bit of stress and panic. Because apparently, that part of my colon looked pretty good. In fact, it was no worse then when I had my colonoscopy. What!? As soon as the words mild colitis came out of their mouths, my drugged up mind panicked. Yes, I felt I wasn’t as bad off as the last two flares. But mild? My symptoms weren’t mild.

You might ask why this would worry or panic me. I mean isn’t it good that it wasn’t that bad? And yes it is but it also left me with no answers and feeling like I could be classified as the girl who cried wolf. My GI doctor has said many times, she has to be careful with me because she feels like she doesn’t get the full picture of how much pain I’m in because I’m very clinical about it and have a high tolerance for it. These results made me feel like I would once more be in the position where doctors would not believe me (this is because of my past experiences with my back). My mom tried to calm me down by saying the sigmoidoscopy only shows the tail end of the colon (not the full picture) and that my doctor would not have hospitalized me if she didn’t think I needed it. But still, I worry now.

I stand at the crossroads now in terms of my treatment. At my last Remicade infusion, my doctor increased the dose to the maximum to try and reign in my colitis. I can’t go any higher but I flared anyways and have to be on prednisone again. My GI doctor thought it was time to give me the only other option for me: Vedolizumab (ENTYVIO). In some ways it works similar to Remicade and Humira only it is gut-selective, blocking gut-directed white blood cells that are attacking the GI tract. It has only been used for 3 years so the long term effects haven’t been studied like Remicade (which has been used for 20 years, resulting in long term studies). But so far, it is considered to have less serious side effects than Remicade and Humira.

However it does not treat my sacroiliitis. Because of my ulcerative colitis, the only options available to treat it is Remicade or Humira, which can not be used in conjunction with Vedolizumab. Curses. So that is my dilemma. My GI doctor said she would be in communication with my rheumatologist in order to discover if there are any other treatments, but I’m not overly optimistic. I still have some time, but I’m 98% sure I’m going to give Remicade another go. I almost went a full year without getting a serious flare. Maybe the fifth time will be the charm?

Processed with VSCOcam with b5 preset

For now, I am focusing on creating food I can eat and digest easily, while still maintaining a balanced diet and regaining my strength. I’ve already made a couple of successful recipes but I don’t know if I am up to taking pictures and blogging about them yet. I’ll see.

The picture in the beginning is part of a hike I do in the hills close to my house. Every time I go through a flare, I lose a lot of strength and it can sometimes be a struggle just to walk a block. I’m not so bad off this time, but tackling this hill has always been the measure of my healing progress. I go at it in sections, doing only parts of it, adding to it when I gain strength, until I can do the whole thing and not feel completely exhausted.

Right now though it is so wet even my heavy duty hiking shoes would get stuck in the mud. Because of the weather and cold, I’m going to look at joining a gym to help with my recovery. Last time I focused on walking, running, and hiking, but the weather was nicer then and my knees didn’t hurt as much.

I know this was long so congratulations if you read it all. Here’s to making the next steps, choosing paths, and forging ever forward on the path to healing. Thank you for reading!

This site uses Akismet to reduce spam. Learn how your comment data is processed.

Hi! I’m Megan Wells. Food, photography, and writing is how I deal with life’s struggles, mainly ulcerative colitis and living with a j-pouch. Read more…