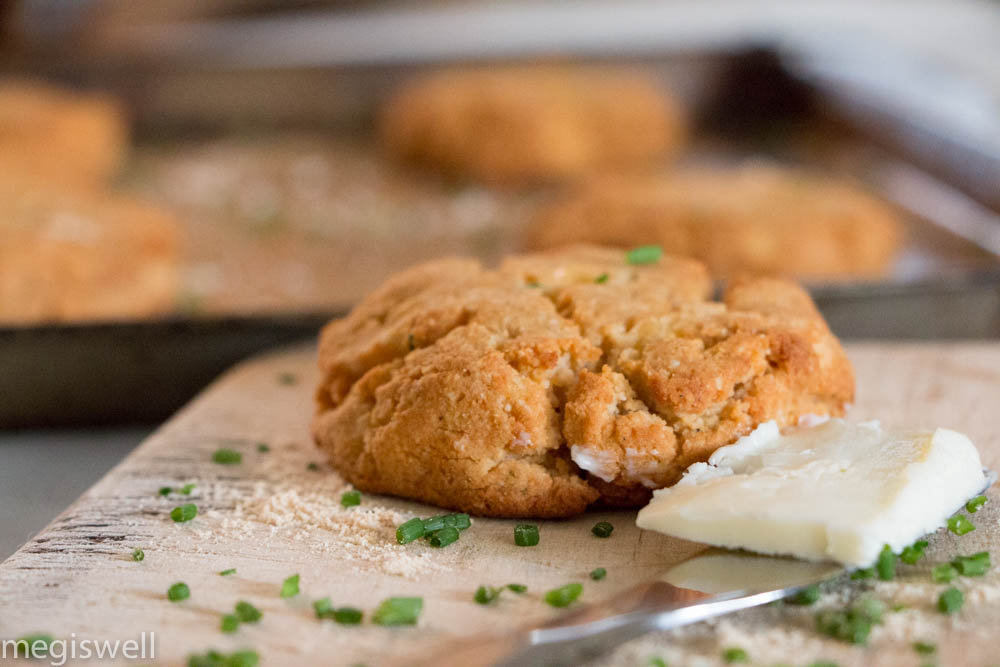 Since I was diagnosed with ulcerative colitis, breakfast has become my favorite and most important meal of the day. However, I have gone through some changes in what works best for me.

In the beginning, sweet breakfasts made me feel the best. They filled me up, satisfied my taste buds, and did not cause me any problems. Whenever I tried to change it up with a savory option, like scrambled eggs, I would experience really bad heart burn.

But after getting back on food after my second big flare, that sugary sweetness in the morning did nothing for me. I wanted savory and I wanted it bad. One of my main complaints with my experience of SCD was the lack of savory baked goods. With a few exceptions, most of the stuff I had tried turned out sweet. So I started experimenting. And the Cheddar and Chives Biscuits were born…

Now you get to throw in some green.

Just add in the shredded cheese and chives and toss to combine. 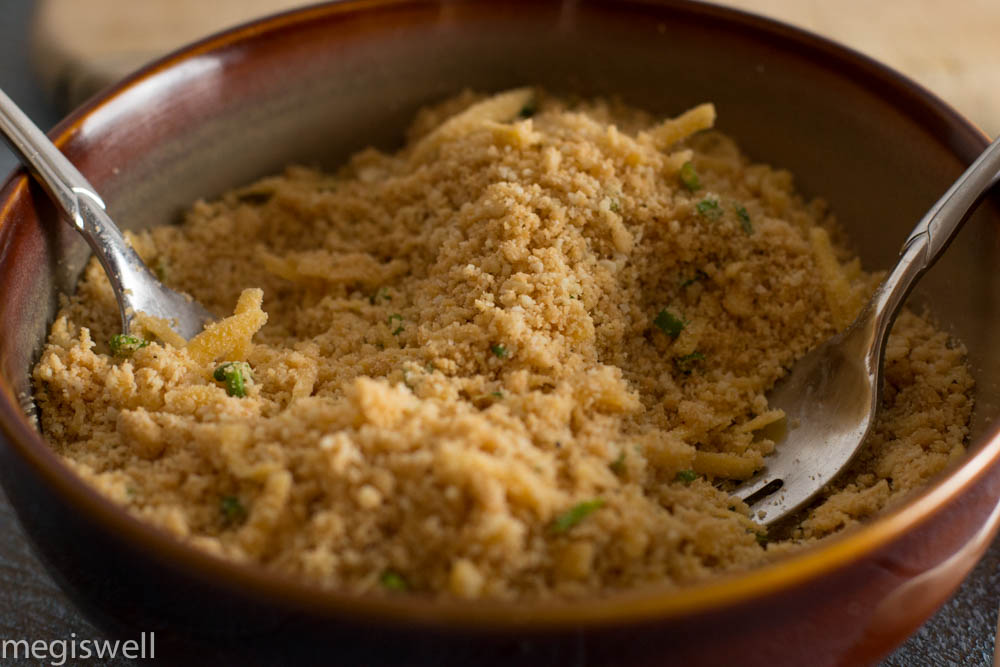 Cheddar cheese and chives tossed into flour and butter mixture

Add in the wet ingredients next:  the yogurt, french cream, and coconut milk. Mix with a spatula until combined. It will be pretty thick and fairly dry, with no excess liquid. 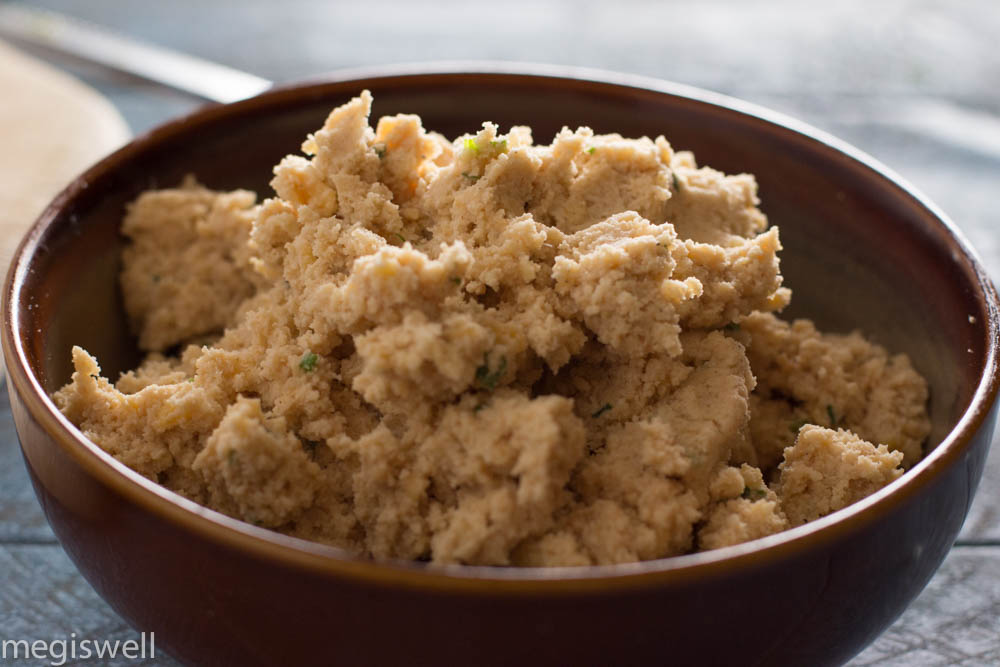 Now the dough is ready to be popped into the oven. Drop 1/4 cup rounds onto a baking sheet lined with parchment paper or a non-stick baking mat. I use a Real Simple® Professional Silicone Baking Mat. It is awesome. I was getting so tired of feeling like I was starting an art project every time I was in the kitchen. Now I just plop it down and get to business. 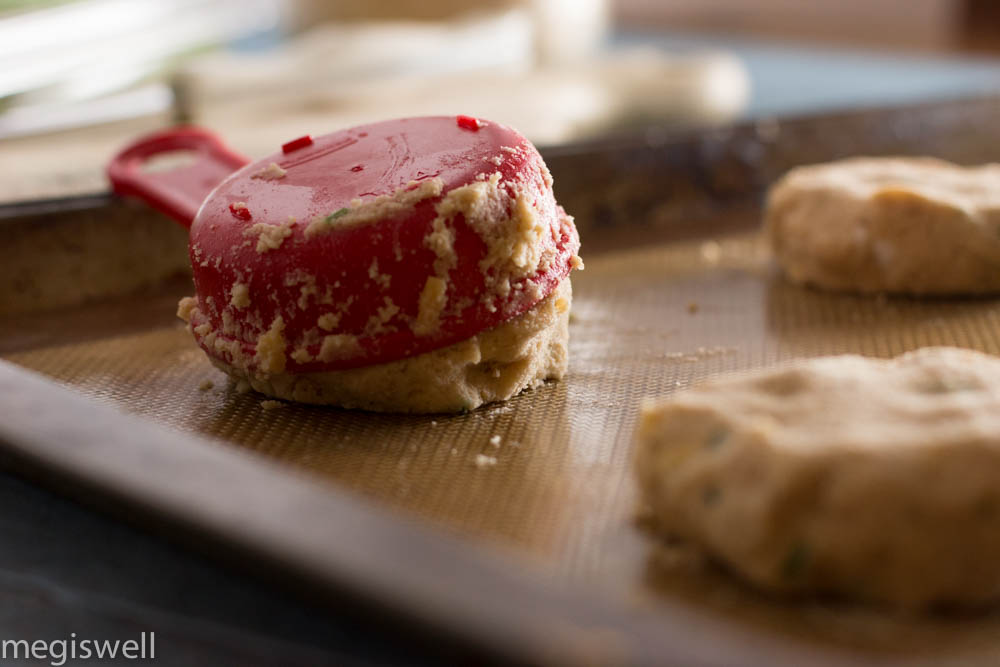 Bake at 350 degrees Fahrenheit for 20-30 minutes or until slightly brown. These turn out best if you let them cool in the oven after you have turned it off. This crisps them up a bit and makes them a little more sturdy as well. And you’re finished! 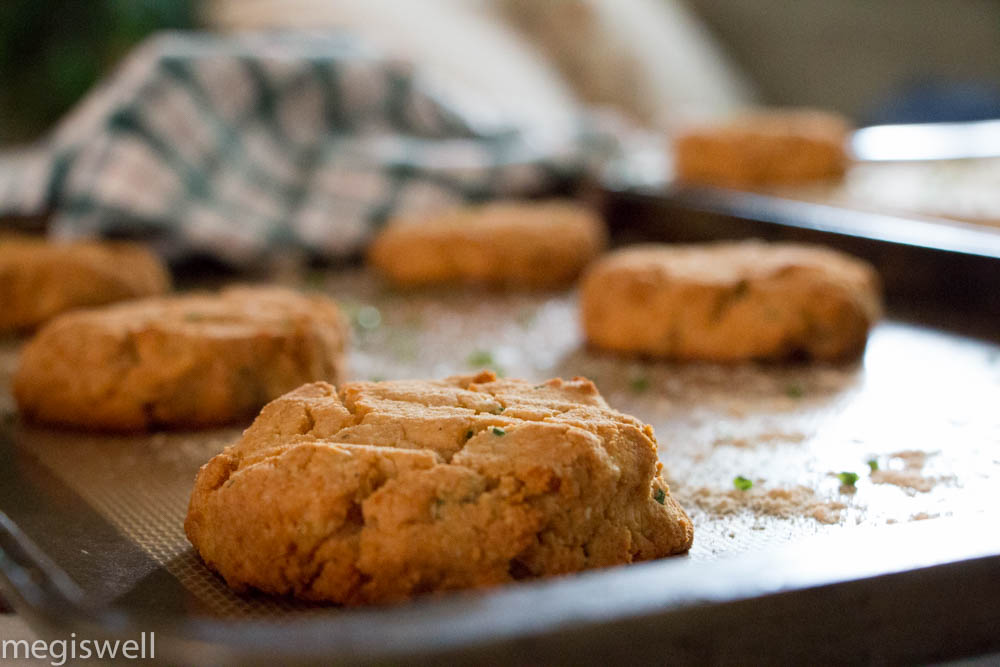 Ta-da! Now onto a couple of notes.

The first time I made these successfully, I used a really coarse hard sea salt. I initially was turned off by how it did not incorporate into whatever I was making. But in the Cheddar and Chives Biscuits, it ended up working. The second time I made these I used a different type of salt and I really missed those bursts of crystalized salty goodness that were present in the first. So I recommend using a really coarse and hard sea salt if you have it.

Substitute plain greek yogurt for homemade and use sour cream in place of french cream. I can’t guarantee that it will work because I honestly don’t want to bake something I won’t be able to eat. That is the literal definition of torture in my book. However, using greek yogurt and sour cream will not interfere with the chemical reactions that help make the final product.

My favorite way to eat these at breakfast time is in a Sausage, Egg, and Cheese Breakfast Sandwich. Actually, it is the only way I eat them because it is so good I haven’t tried other ways. Check out that post to see how it’s done. 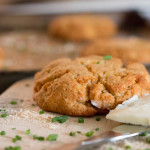 Sturdy yet still soft, these savory biscuits are perfect for mornings where you need a filling meal. Whether you are taking it to go in an open-face breakfast sandwich or smothering it in gravy, you'll be happy and full.
Course Breakfast
Prep Time 10 minutes
Cook Time 30 minutes
Total Time 40 minutes
Servings 12
Author Megan Wells

If you are not following SCD and don't want to make your own yogurt or french cream, you should be able to get the same results by using a plain commercial yogurt brand and sour cream.

This site uses Akismet to reduce spam. Learn how your comment data is processed.

Hi! I’m Megan Wells. Food, photography, and writing is how I deal with life’s struggles, mainly ulcerative colitis and living with a j-pouch. Read more…